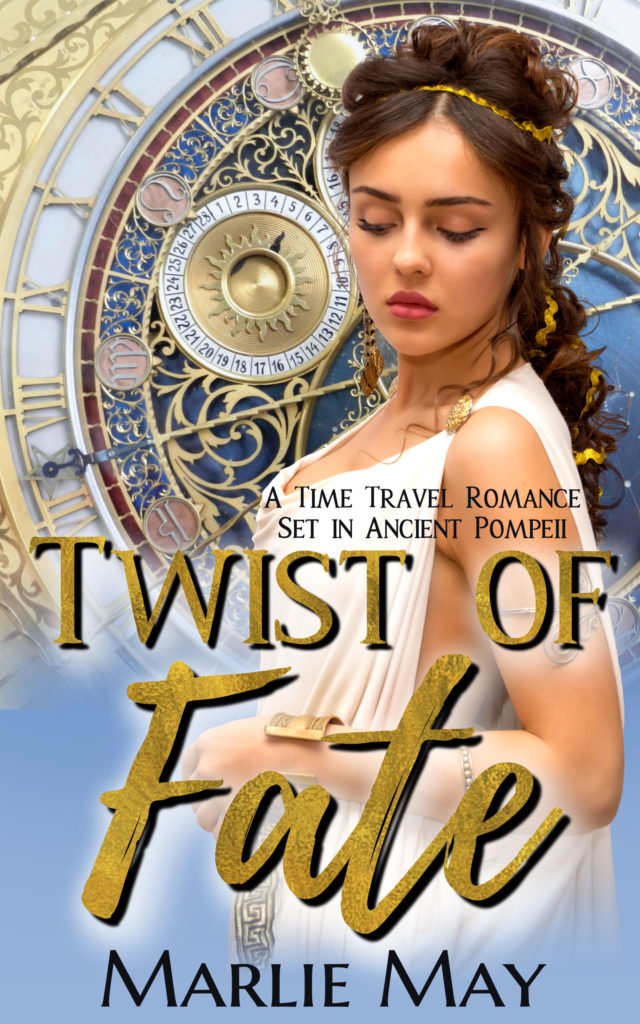 Part of the Standalone Titles series:

Twenty-first century Greek goddess Pandia is shaking in her Jimmy Choos. A few weeks ago, she traveled back in time to attend a party, where she accidentally suggested Julius Caesar abandon politics for gardening. Her father, Zeus, summons her to modern Olympus after he discovers her meddling eliminated the month of July. To teach her the importance of fate, he strips Pandia's goddess powers and sentences her to a stint of mortality in ancient Pompeii.

Pandia refuses to let her punishment get her down. She'll do her time, leave destinies untouched, and be home in time for her next shift at the local animal shelter. Instead, she's mistaken for a prostitute and arrested for inciting a riot. Sentenced to serve as a massage therapist in Pompeii's gladiator school, she's assigned to Caladus, a gladiator whose washboard abs test her vow to remain uninvolved.

To escape Pompeii, Pandia must prove she respects mortals' fates. But she's falling for Caladus, and her time's running out: Mt. Vesuvius is rumbling.

Twist of Fate guarantees laugh-out-loud moments, plenty of swoony gladiator romance, on-the-page heat, no cheating, no cliffhangers, and a happily ever after.

TWIST OF FATE
A Standalone Novel
© 2019 Marlie May

As I hurried down the broad, sweeping staircase leading toward the palace’s atrium, I tried to convince myself I wasn’t about to meet my doom.

Or be thrown into Tartarus, the Greek god’s version of the pits of hell—where I’d spend an eternity avoiding the clutches of Hecatonchires, the many-armed giant.

You think a drunk guy with two arms is bad? Try one-hundred. And his lips…!

I shuddered. Not going there.

My heart a solid lump in my throat, I halted outside the Great Hall. The atrium’s fifty-foot ceiling seemed to press on my shoulders, the weight too heavy for my frazzled nerves.

The guard standing in front of the ornately-carved double doors grunted, then swept open the door and waved for me to enter.

After giving him a jittery smile, I swallowed, tightened my spine, and strode into the Hall. I paused in the entry and gulped. Where was everyone?

My father, Zeus, sat with his wife in fancy, gold-trimmed thrones at the end of the room, matching scowls on their faces. Hera bumped Father’s arm, and he looked up and grimaced. With a flick of his hand, he undid the top button of his Armani shirt.

Sunlight drifted in through the windows along the aisle, creating rainbows on the mosaic tiles. As I walked toward the receiving area, the click-click-click of my heels echoed in the stillness surrounding me, each step crying out a warning. If this had been a normal day, gods would be gossiping in alcoves between the pillars while waiting for an audience with their king.

The fact that this was me, Hera, and Father didn’t look good.

Hera leaned forward in her chair, and her blonde hair swung across her shoulders. She wore a black and gold Givenchy dress and, as much as I hated to admit it, it looked fantastic on her. Her ice-blue eyes seemed to pierce my chest as she watched me walk toward her. The witch hated me. Of course, Father had cheated on her with Mother. Not that Mother could help herself. She was Selene, Goddess of the Moon. How could she be expected to maintain self-control when her orb was full?

I came to a halt in front of the dais and tried not to flinch under Father’s white-hot gaze.

“Pandia.” His sigh ground through my bones. “You’ve done it again.”

“I…I…” Could I get any more tongue-tied around him? He’d become an expert at reducing me to a crumbling heap by the time I turned five. Right after Mother dropped me off for a weekend at Olympus that turned into multiple lifetimes. “Can you be a little clearer?”

Thunder rumbled above the coffered ceiling. Never a good sign.

Let’s go back in time and party with some Roman guys, my half-sister, Aphrodite, had said.

No one will find out, she’d said.

I should’ve known better. Every time I trusted her, I was the one who wound up dealing with our Father’s wrath.

“You know we reserve time travel for educational purposes.” He raked his fingers through his white hair, making it stand on end. “Just because you can shift to other Earth time periods doesn’t mean you’re allowed to travel into the past whenever you feel like it. Each time you do, you screw up a mortal’s destiny.”

“I didn’t mean to cause problems.” My words sputtered from me. “While sharing a bottle of wine, I casually suggested to Julius that he should think about the negative impact he made on others when he conquered the world. He asked what he could do instead, and we talked about gardening. Nothing’s more relaxing than digging in the soil. He—”

“Enough,” Father shouted, and thunder rumbled overhead again. “You’re so busy convincing others to think about their actions that you never consider your own. I will not tolerate your interference any longer.”

My stomach muscles quivered, but I held myself still. “I only wanted to help.”

Hades knows I’d tried to be a restrained, respectable goddess since I finished college and moved back to Mt. Olympus. As king of the gods, my father could do whatever he wanted. While I…Well, let’s just say that the life of a goddess could get monotonous. “It’s boring around here,” I whispered.

A lightning bolt screamed across the room, leaving Hercules’s portrait with a unibrow. I squeaked and ducked when a second beam zipped so close to me the aroma of singed hair filled the air.

“You’re the Goddess of Light,” Father shouted, making the rafters shake. “If you spent more time developing your assigned career, you wouldn’t be bored.”

“You know that’s only an honorific title,” I said. “Apollo has the sun wrapped up. The stars belong to Astraeus. Aunt Eos won’t let me anywhere near the dawn. What’s left? Goddess of the LED? When Aphrodite said we—”

“Don’t shift the blame onto your sister.” Father drummed his fingers on the arm of his throne. “This isn’t the first time you’ve been involved in something like this. Don’t forget the Columbus fiasco.”

I stiffened my spine. “I did not tell Chris to turn all those ships back to Spain.” Although, I had casually mentioned that explorers should realize that indigenous people might resent being indoctrinated into a new way of life. “And Julius and I barely talked.”

“You altered the past,” Father said. “After your little talk, Julius abandoned politics to grow daisies. Hera suggested we watch the Fourth of July fireworks display in D.C., but July no longer existed. I had to go back in time, wipe Julius’s mind, and return him to the path he followed before you intervened. You know I hate scrambling their brains.” Shifting forward, he braced his hands on his knees. “It’s past time you learned to think about the result of your actions.”

So, he saw me as selfish, did he? I couldn’t stop the crushing feeling from building behind my ribcage. It seemed I’d never please him. Please her.

Blinking, I stared through the windows behind him, struggling to maintain control. It was bad enough I broke down in front of Father, but Hera thrived on weakness.

“For whatever reason, you always end up interfering with the important ones.” Father lowered the end of his magical staff to the floor and leaned it against his knee. “If you chose simple men like goatherds or cowboys, this would not be a big issue.”

Cowboys were another matter altogether.

“When your mother left you with me,” he said. “I promised to raise you well. Instead, I let you run free.” He cut a glance at Hera and cleared his throat. “But I can’t keep covering for your mistakes any longer. Your punishment will set an example for the other gods.”

Hera dimpled a smile Father’s way but fed me a decidedly different one. I swear. Her teeth had points.

“We thought something similar to community service would do nicely.” Father shifted on his seat until his back faced Hera.

He grinned and winked at me.

I glanced back and forth between them, but couldn’t figure out what the gesture meant.

“Actually,” Hera said. “I thought Troy would be the perfect location for learning opportunities.”

Hera sighed. “True. Are you sure you won’t reconsider 1776 Virginia, then?”

His scowl made a black fog appear along the edges of the room. “There’s a revolution going on during that time.”

“What’s a little musket fire here and there?” The look she sent me could level a forest. “It’s still a fantastic era.”

Pompeii was…oh, yes, in Italy. “You realize this makes no sense. How will doing community service in Pompeii teach me to leave people alone?”

“I want you to observe the impact of a major Earth event without giving in to your urge to interfere,” he said. “When I see you’re able to leave fate alone, I’ll bring you home.”

I tapped my chin. I had a few things planned for next week, but my calendar for this week was clear. “How long will this take?”

“Longer than you may think. You’ll need to know Latin.” He dipped his magical staff toward me, casting a spell. “79 AD will give you plenty of chances to observe mankind.”

“Hold on, there.” I darted up the steps, squeezed between the thrones, and grabbed onto his arm. “I thought you meant modern Pompeii.” I had no problem flitting back in time for a brief visit, but how could he expect me to spend more than an hour in the ancient past?

We were talking no AC. No internet. No mocha lattes.

Hera squinted up at me. “We can’t let her go dressed like that.” Taking Father’s staff, she poked it my way.

In a flash, I wore a toga and gold sandals. Definitely an odd look for me.

“What?” she said with a shrug. “She looks good in white.”

His brow furrowed as he sought inward, sifting through my potential future in this outfit compared to my other. “Yes, yes, a toga could work.” The slyness in his gaze sent anxiety skating along my spine. What in Hades was going on here? “Promise me you’ll stay away from important historical figures while you’re there. Observe, but don’t intervene, no matter what happens around you. Learn to respect destiny. You’re not the only one with a fate that must not be changed.”

A wave of concern washed over me.

Why was he bringing up my fate?

Something odd was going on here, but I couldn’t pin it down. “Just a sec. You want me to go back in time and observe? Isn’t community service about doing good things for others? And Pompeii’s the place with the—”

“Pandia.” His face flamed. “You question my judgment?”

“No. Of course not.” I directed my attention to the floor. “Exactly what big event are we talking about here?” Dread curled down my spine. I had a sneaky suspicion that—

Hera tipped her head back and cackled.

Shooting another broad smile at me, Father waved his magical staff my way.

Power blasted through me, and Mt. Olympus disappeared.