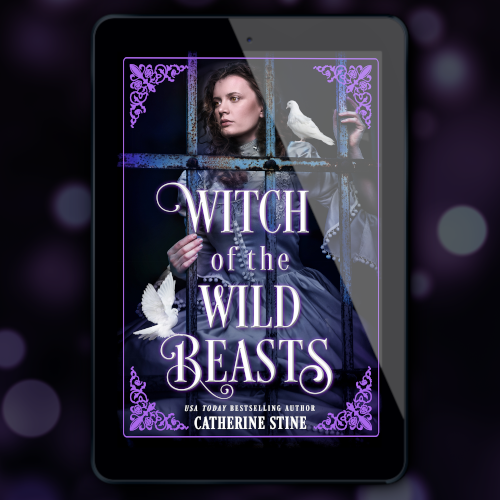 When Evalina is imprisoned for witchcraft, will her supernatural bond with animals be her curse or salvation?

In 1854, Evalina Stowe witnesses the murder of her brother by Dr. Dowdrick, an enraged client at the tailor’s where they work. Desperate to stop him, she rouses a swarm of wasps that sting the doctor while she stabs him with scissors, and then flees. At a subsequent job when birds race to her defense, Evalina is declared a witch and sent to Philadelphia’s Eastern State Penitentiary.

While imprisoned, Evalina is horrified not only to learn that Dr. Dowdrick is still alive, but he’s experimenting on inmates. Determined to get inside his Eclectic Medical School, to expose his nefarious activities, she’s passionate about protecting fellow prisoners, especially Lewin, a child thief who knew her brother, and Birdy, a kind, resilient Welsh man serving time for a worker’s death while blasting granite for the railroad.

Evalina, her friends and her “wild beasts” work against time to unmask Dowdrick’s crimes when she participates with him in a symposium, showcasing Philadelphia’s premium doctors. If they fail, not only will the doctor’s evil deeds continue unchecked but Evalina and her crew will surely be hung.

KEEP READING TO SEE AN EXCERPT & ENTER THE GIVEAWAY!

Witch of the Wild Beasts
by Catherine Stine

WITCH OF THE WILD BEASTS
A Standalone Novel
© 2020 Catherine Stine

The wind whistled through my thin muslin clothes as the porter led me down what seemed a narrow pathway to the back of the establishment. “Stairs ahead,” he warned.

I stumbled up one, two, then three steps and through what seemed like two sets of doors. They slammed behind us.

“Is this Dr. Dowdrick’s establishment?” I ventured.

“Patience. They’ll speak to you when they’re ready,” was his cryptic reply.

He led me to a sturdy chair and eased me onto it. Then he stretched my arms tightly behind the chair and secured them with chains. “They’ll see you shortly,” he said. With that, he was gone.

It was terribly disorienting to not have the use of sight. My arms throbbed. If I did not move them shortly, they would turn numb and bloodless. “Please, Porter, come back!” I begged.

“He is gone. I deign to speak with you now.” This petulant voice was none other than Dowdrick’s.

“Take my hood off, if you please.”

“Perhaps, perhaps not. Do not rush me. So, you requested a visit to my office and here you are. Happy now?” He sniggered.

I resisted my rising panic. “As I said over in Cherry Hill, I know what you did to Dolly.”

“You drugged her with a foul concoction that banished her memory.”

“Ah, not foul. I’d call it miraculous. But, yes, correct. I could do the very same to you.”

“I have told other prisoners about your experiments. Why, I even spoke to Dr. Shakesby about your testing without patents. If prisoners start to sicken or die while under the influence of your elixirs, people at Cherry Hill will know who was responsible.”

Dowdrick let out a malicious chuckle. “Who will believe your word over mine? Who will care that a thief or a madam or a filthy witch went into a stupor, even died? Most would find it pure relief. Benjamin Franklin and William Penn’s Philadelphia has a thin sheen of civility and reason. But we both know one need not dig far beneath its surface to find rampant superstition and chaos lurking there.”

He was right. People claimed to be God-fearing Christians but oftentimes they prescribed to the old ways—hexes and curses and calling up night sprites to keep their households safe.

“Look, I am not here to blame or report on you,” I told him. “Let’s put that aside. I am here to discuss a business proposal. What exactly was it you gave Madame Rouge?”

“Ha! You’re beside yourself with curiosity.”

I pushed on. “What did you gain from cutting her and stitching her up?”

Dowdrick broke into peals of laughter. It disgusted me he was so thoroughly enjoying this. “You are a mere street mongrel. Your elevated sense of importance is a joke.”

“I must be the smartest of street mongrels then! For I know more than you can imagine about you and your dubious activities.”

“If nothing else, you entertain me,” he said jovially. “Do go on!”

I needed to stoke his explosive rage, his rivalries. I used every tidbit of what Shakesby had relayed and made up the rest. “You are in savage competition with the finest doctors in Philadelphia. There is a frantic race to find cures and obtain landmark patents. The first to succeed in these will be graced with having their discoveries in the medical books; they will be the toast of the prime medical establishments.”

“The only frantic thing is the fairytale you weave,” Dowdrick said. But his next question revealed his jealous interest. “If you are so wise, which famous doctors do you know of?”

“Thomas Mutter for one. Already famed for his revolutionary work with burn victims. They say he conjures practical magic with facial restoration.”

“Ha!” Dowdrick was clearly taken aback. “He is no one to me.”

“Surely you’ve read of him. Why, I hear tell folk are lined up for blocks around Jefferson Medical Hospital waiting eagerly to be helped by Dr. Mutter.”

“From where, pray tell, did you receive these faulty rumors?” Dowdrick’s tone gave it away. He was seething with envy. I had hit the mark. If I could see him now, no doubt his nostrils would be flared, his pudgy cheeks red with fury.

“Ah! I must hold some cards close to my vest until you listen to my offer. And if you please, before we conduct business, remove my hood.”

“All hell-fired up you are, Miss Almighty! I could take you down a peg or two; administer the same powder I gave to Madame Rouge. It would make you forget everything. If I give you enough, it could easily kill you…”

At this, my pulse began to beat in terror, but I forced myself to calm. “And then? You would never gain fame through my method. My foolproof method.”

“No need. I already have the powders I gave Madame Rouge. I will be the star of the spring Discovery Symposium. Dr. Mutter will be astonished. They will all be astonished.”

Discovery Symposium! This was better news than expected—a tool to gain leverage. “Then your powders and vials must be quite magical to astound the best doctors in Philadelphia! Do tell what the mixtures are intended for.”

“Surgery without pain,” he exclaimed. “We are all racing to perfect the medication that can do this. With it, patients will not have to get blind drunk, or scream in agony as we cut off limbs and stitch their raw nubs.”

His earnest answer caught me off-guard. It was a worthy quest, which forced me to admit that villains as well as heroes had missions they believed in. People contained both good and bad; the truth and the light could, indeed be hard to discern through the many gray layers. This made me think of Amity and her spiritual verses. Still, life wasn’t only about moral perfection, but striving to be better, to do better. I had my own mission, however winding and I needed to stay the course. “Your powder so perfectly put Dolly into a painless state of being,” I gushed. “Why, she had no memory of even being under the blade. How utterly impressive, Doctor! I misread you. I underestimated you and your talents. Let me ask again with a more open mind, where did this impressive mixture come from?”

“My partner, Dr. Sumac procures it from Peru,” Dowdrick revealed with fervent glee. “A lovely white flower. They call it Angel’s Trumpet, though it has a pinch of the devil in it, too.”

I laughed with him, all the while, my innards crawled in loathing. The impertinence, the criminality of experimenting on a woman, or any person—without their consent! It was Dowdrick who should be behind bars in Cherry Hill Penitentiary, not I. Not Dolly, who was helping desperate women earn a day’s wage—albeit in a questionable trade—yet with their full consent. “I suppose we all have a bit of the devil in us,” I said, “mixed in with pure genius.”

“My concoction is rather genius,” he agreed.

The fact was, this Peruvian powder could kill. It could scrub someone’s mind. Make them a zombie as in one of Poe’s horror stories. But I dared not say this.

Because I had him.

Dowdrick had already said too much. His overweening pride was the glue that would bind him. I only had to lure him in slowly so he would not see my web. Prideful men had an insatiable appetite for flattery, adulation, shiny medals and coinage. I would do my best to supply these if it kept my friends at Cherry Hill Prison safe from harm. If it brought him to justice.

We were quiet for a time. Silence was dangerous though, for I sensed Dowdrick also knew he had confided too much.

“We are done here for now,” he said coldly as he began to pace, leaning to one side.

“My mysterious offer still awaits,” I tempted. This heavy hood was stifling. I needed to hurry before I fainted from its wooly confines. “Are you not curious? It will propel you to the highest of heights. Make you far more famous than Dr. Mutter.”

“What is it then? Hurry! Out with it! I must get to work. I run an entire medical college here.” He groaned. “My ribs pain me where you plunged in those infernal scissors. At night, I can hardly walk. I brought you here to interrogate you where I have total control, to find out how much you know. Perhaps also to give you a taste of your own medicine,” he finished sharply.

The powder. I must avoid him dosing me.

To celebrate the release of WITCH OF THE WILD BEASTS by Catherine Stine, we’re giving away a $25 Amazon gift card and a custom Witch of the Wild Beasts mug to one lucky winner!

GIVEAWAY TERMS & CONDITIONS:  Open to US shipping addresses only. One winner will receive a $25 Amazon gift card and a custom Witch of the Wild Beasts mug. This giveaway is administered by Pure Textuality PR on behalf of Catherine Stine.  Giveaway ends 3/31/2020 @ 11:59pm EST.  CLICK HERE TO ENTER!

CATHERINE STINE is a USA Today bestselling author of historical fantasy, paranormal romance, sci-fi thrillers and young adult fiction. She lives in Manhattan, grew up in Philadelphia and is known to roam the Catskills. Before writing novels, she was a painter and children’s fabric designer. She’s a visual author when it comes to scenes, and she sees writing as painting with words. Witch of the Wild Beasts was a second prize winner in the 2019 Valley Forge RWA Sheila Contest. Other novels have earned Indie Notable awards and New York Public Library Best Books for Teens. She loves edgy thrills, perhaps because her dad read Edgar Allen Poe tales to her as a child. Catherine loves spending time with her beagle Benny, writing about supernatural creatures, gardening on her deck, traveling and meeting readers at book fests.