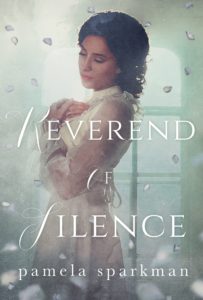 A coming of age story about faith, love, and overcoming society’s prejudices during the American Antebellum period.

In 1810, Lucy Hallison suffered from a severe illness at the age of three, and later recovered, a deaf-mute. Unable to relate to the world in which she lives, she’s often ignored and sometimes treated with cruelty. Until a boy, Samuel Burke, steps into her life at the tender age of seven, coloring her world and showing her what it means to be seen, to not be invisible, to be understood.

The two become inseparable childhood friends, and as they grow and mature, there is the promise and hope of something more that also grows between them. But the hope of something more is put on hold so she can attend The American Asylum at Hartford for the Deaf and Dumb, the first of its kind, requiring her to leave the only home she’s ever known and the only boy she’s ever loved.

But while she is away, tragedy strikes, and Samuel is now the one unable to relate to the world in which he lives, unable to find his own voice, and withdrawing from everyone and everything he’s ever known.

When Lucy returns home from school, she has one goal in mind—to put color back into his world the way he had once put color into hers.

Because Samuel Burke had been her voice when she had needed him most.

Now, she is determined to be his.

Add It to Your Bookshelf Today!
Goodreads  |  BookBub

KEEP READING TO SEE AN EXCERPT & ENTER THE GIVEAWAY!

Reverend of Silence
by Pamela Sparkman

Add It to Your Bookshelf Today!
Goodreads  |  BookBub

“Mama, I’d like you to meet Samuel Burke, Reverend Burke’s son.” Noah beamed like he was introducing royalty to his mother. Lucy slid in behind her brother, her lunch pail loosely held by her fingers, nearly forgotten, stealing glances between us. “Samuel, I’d like to introduce you to my mother, Mrs. Hallison. My sisters are around here somewhere, I imagine. And my father and brother will be along shortly.”

“H-Hello, Mrs. Hallison,” I said. “Y-You have a very nice home.” I found that I stuttered a bit whenever I was nervous, a detail I’d never realized about myself.

Mrs. Hallison stepped forward and smiled. Hers wasn’t as soft as my mother’s. My eyes instantly cut to Lucy, and I wondered where her smile had come from.

“Samuel,” she said. “I’m pleased to meet you. Your father speaks highly of you.”

She gestured toward the box sofa. “Would you care to sit?”

Noah nudged me forward. “Of course he would. I want him to meet everyone.” Before I could take a seat, however, his sisters entered the room. They were much older than Noah and Lucy. They looked very much like ladies, old enough to get married soon.

“Oh, there you two are,” Noah said. “I’d like you to meet Samuel Burke, my new friend. Sam, these are my sisters, Celia and Louisa.”

“Hello,” the redheaded one said softly. “I was just on my way to bring in more wood.” She dipped her head. “If you’ll excuse me.”

I found myself seated between Mrs. Hallison and Noah’s other two sisters, feeling a bit like a sandwich. Lucy perched herself on one of the matching chairs, all by herself, her feet not even reaching the floor, and I compared it to the space I had, which was to say none, and I found I was extremely jealous of all the space she had to herself. My leg bounced nervously.

But when my eyes found hers, I found she was . . . laughing . . . though she tried to hide it. Her hand covered her mouth, her eyes crinkled around the edges, and there was a sparkle in them that wasn’t there before. I leaned forward a bit to look around my seat companions, who were speaking among themselves now. I wanted to know what she thought was funny. However, that seemed to make her eyes sparkle more until she had to turn completely away from me. I leaned back, confused.

What was so funny?

When she turned her head my way again and she glanced at my bouncing knee, I saw her biting back another smile.

She was laughing at my being uncomfortable, wedged between her mother and sisters. I willed her to look at me so I could scold her with my eyes. I knew how to do it. My father had given me the look enough, I was ready to give it to her when she finally lifted her eyes to mine. But instead of being reprimanded, her smile only brightened. Perhaps I wasn’t as good at giving the look as I’d hoped. Or . . . maybe . . . I was a sucker for her smile. Either way, something in me weakened and I found myself smiling, too, even laughing at my own situation.

“Something funny?” one of the sisters asked. Louisa, I think.

“No,” I said. “Just thinking of something that happened today.” I looked away from Lucy. I had to or else I’d laugh again.

“Hello?” a tall, broad-shouldered man said, entering the room, wearing a topper, tan pantaloons, and a linen shirt. The floorboards creaked as he walked across them.

“Oh, there you are, Jasper,” said Mrs. Hallison. “This here is Samuel Burke. Noah brought him home from school—to meet the family,” she finished.

Right away, I could see where Noah got his looks from—his father. Dark hair, dark eyes. He had a stern set to his jaw. I recalled how Noah had stood up to Fredrick that day in the schoolroom and how stern his jaw had been. And he would grow to be huge. I swallowed. “Y-Yes, sir,” I answered, standing to shake his hand, remembering my manners.

“Pleased to meet you,” he said. “We saw Noah gathering wood when we were coming inside. James is helping him. They’ll be in in a moment.”

I nodded and reclaimed my seat.

“James is our other son,” Mrs. Hallison explained. “He and Mr. Hallison make and repair saddles and sell them down on the wharf.”

I noticed Mrs. Hallison’s appearance then, not having paid much attention to it before, other than to notice she seemed tired. Even her brown hair seemed tired, hanging around her face, having fallen out of its pins that were holding it up. While Mr. Hallison wore fine clothes, she wore a faded dress that had been patched and sewn several times.

“All done,” Noah said, re-entering the room, seating himself in a chair by the window. “We stacked the wood where you said to, Papa.”

Mr. Hallison had taken the other matching seat across from Lucy, his hat resting on his knee. James leaned against the doorframe after he’d introduced himself. He, too, had the look of his father. The sisters, Celia and Louisa, I guess I could see a little of both of their parents in them.

“How was your day, Jasper?” Mrs. Hallison asked.

Mr. Hallison and James spoke about the saddles they made. I had to admit, I was wholly fascinated by what they did. I even thought it might be something I’d want to do. Everyone needed a saddle, after all.

Soon everyone else began to talk about their day. The ladies spoke of their knitting and food preparations. Noah discussed his lessons at school. I discussed mine when asked of them. But no one engaged with Lucy. Not even to smile in her direction. She just sat there, like a piece of furniture, an object in the room no one paid attention to.

I looked around at her family as they chattered on about this and about that. It was Noah who finally observed his sister had left the room.

“Where did Lucy go?” he asked.

“She left,” I said, throat so tight, I had to push the words out.

I shook my head and stood, feeling like I might crack down the middle. “Half an hour ago. Mr. and Mrs. Hallison,” I said, “I must be going now. It’s getting late. I told my mother I’d be home in time for supper.” It wasn’t a lie, and for that I was grateful, but that was all I was feeling grateful for at the moment.

“I know my way out.” I was upset and wasn’t sure who I needed to be more upset with—Noah and his family, or the illness that’d made Lucy lose her hearing, or the stupid kids at school, or the world in general. So I said I’d see him tomorrow and slipped out the door before words I’d regret later could slip out of my mouth.

I was halfway home when I heard footsteps coming up behind me. I turned, expecting to find Noah. Instead, I found Lucy.

“What are you doing here?” I asked, feeling outside myself. Lucy stopped, her eyes dropping to my mouth, her eyebrows pleating together. I realized my folly and moved toward her while pointing toward her house and then toward the sky. It was getting dark. She should be home. Not out here, chasing me through the fields. “Go back, Lucy.”

She stood there for a moment, looking at me, doing nothing else.

And then I realized—she wasn’t looking at me. She was wanting me to look at her.

“Honey,” I murmured. “Your eyes are the color of honey.” The golden color I couldn’t name before. “I wish they didn’t look so sad.”

She looked over her shoulder, at the house she called home. A tear slid down her cheek.

I’d thought being stared at was the worst thing for someone to be exposed to. I was wrong. Being invisible was. And Lucy Hallison had been invisible to mostly everyone.

She squeezed my hand back and left me standing in the fields between her house and mine.

I watched her until she was safely home before making my own way home again.

Later that night, after I crawled into bed, I wiped my own tear from my cheek, thinking about Noah’s story—how Lucy had toddled after him, calling out his name, and for a split second, when I’d heard her run up behind me, I’d almost thought Lucy was going to call out my name.

I punched my pillow, and then I punched it again, because I knew she would never call out my name.

“Lord, am I old enough to have a broken heart? Because I think Lucy Hallison broke mine tonight.”

I fell asleep before I heard His answer.

To celebrate the release of REVEREND OF SILENCE by Pamela Sparkman, we’re giving away a $25 Amazon gift card to one lucky winner!

PAMELA SPARKMAN grew up in Alabama. She became an avid reader at a young age. The written word has always fascinated her and she wrote her first short story while still in elementary school. Inspiration for her stories always begins with a song. She believes music is the pulse of life and books are the heart of it.

When she isn’t writing, however, she’s spending time with her family and taking one day at a time.

This promotion was brought to you by Pure Textuality PR.