I’m excited to feature a friend’s new release today. CAT SHIFTERS OF AAIDAR: ESCAPE, an action-packed romance set in a distant world, featuring a band-of-brothers, mercenary great cat shifters on a dangerous mission in a foreign world, who meet their matches in kick-ass women.

Details about book 1, ESCAPE, are below, but first, check out this cover! 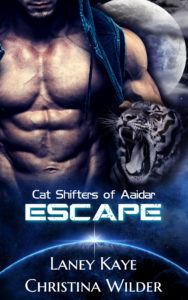 Can an alien shifter and a human find a way to be together on a planet torn apart by war?

Guns, fangs and claws for hire, Herc’s the alpha of a big cat shifter mercenary team, fighting for the Regime. When nurse Maya tends his wounds, her touch on his near-naked body triggers the first phase of an impossible bondmate.

There’s no way in all seven hells Herc will bond with a puny human–despite her alluring curves and feisty attitude. He’s not going to kiss her, so bond two, the meshing of their hearts, will never happen. And sex is totally off the table – or the bed, or any other damned place. So bond three, the irrevocable joining of their souls, isn’t a concern…as long as he never sees her again.

A Resistance fighter, Maya infiltrated the Regime to save her captured sister. Her slash-and-burn plan doesn’t include bonding with a sexy mercenary shifter who’s hunting her people into extinction. But when her secret identity’s revealed, she flees into the desert with Regime soldiers–and a determined Herc–hot on her heels.

If he catches Maya, Herc faces a lifetime on the run from the Regime. But giving in to her heart’s desire will bond Maya to her enemy.

CAT SHIFTERS OF AAIDAR: ESCAPE is book one in a four-book series. Look for book 2, ENGAGE, coming October 12, 2019, ENSNARE in December, and ENDINGS, in January 2020.

THE LURE OF THE MER, by Laney Kaye, coming Spring ’19 from The Wild Rose Press